How this cold-traffic Facebook campaign pocketed $7.06 for every $1 spent by targeting secret interests.

My weird discovery will surprise you.

For the past few years I've used Facebook ads to promote a wide variety of things. From t-shirts to affiliate offers to now mainly my own digital products.

Facebook ads are still my most profitable paid traffic source, but back in the days it used to be a lot easier than it is now.

What happens when 10+ million advertisers compete with you for the same audiences?

It drives up your ad costs, devours your ROAS and makes it increasingly difficult to run profitable Facebook ad campaigns.

Increasing ad costs are a direct consequence of the ever growing number of Facebook advertisers.

More than 10 million according to a recent count.

The competition amongst advertisers drives up the bids for ad impressions in Facebook's ad auction.

In the beginning it was not that bad but over time my ads became more and more expensive.

To the point where I was forced to turn off campaigns because they were only costing me money.

I had to find a solution first, instead of throwing more money into a leaking bucket.

So I started digging.

Guess what I found?

Facebook buries interests. There are actually thousands you could be using.

These hidden interests are more targeted and the audience contains fewer people whom Facebook incorrectly sees as interested.

Here's what I did:

I removed the "public" interests from my targeting and added these hidden ones.

Then I also layered these to force Facebook to show my ads just to the people in my target audience that shared more than one hidden interest.

Finally I excluded all my website visitors to make sure the campaign would reach 100% cold traffic.

The results were undeniable.

By using these hidden interests, my campaign reached a 706% return on ad spend.

Even after scaling the volume, the campaign still banked $4.80 using this hidden interest technique. 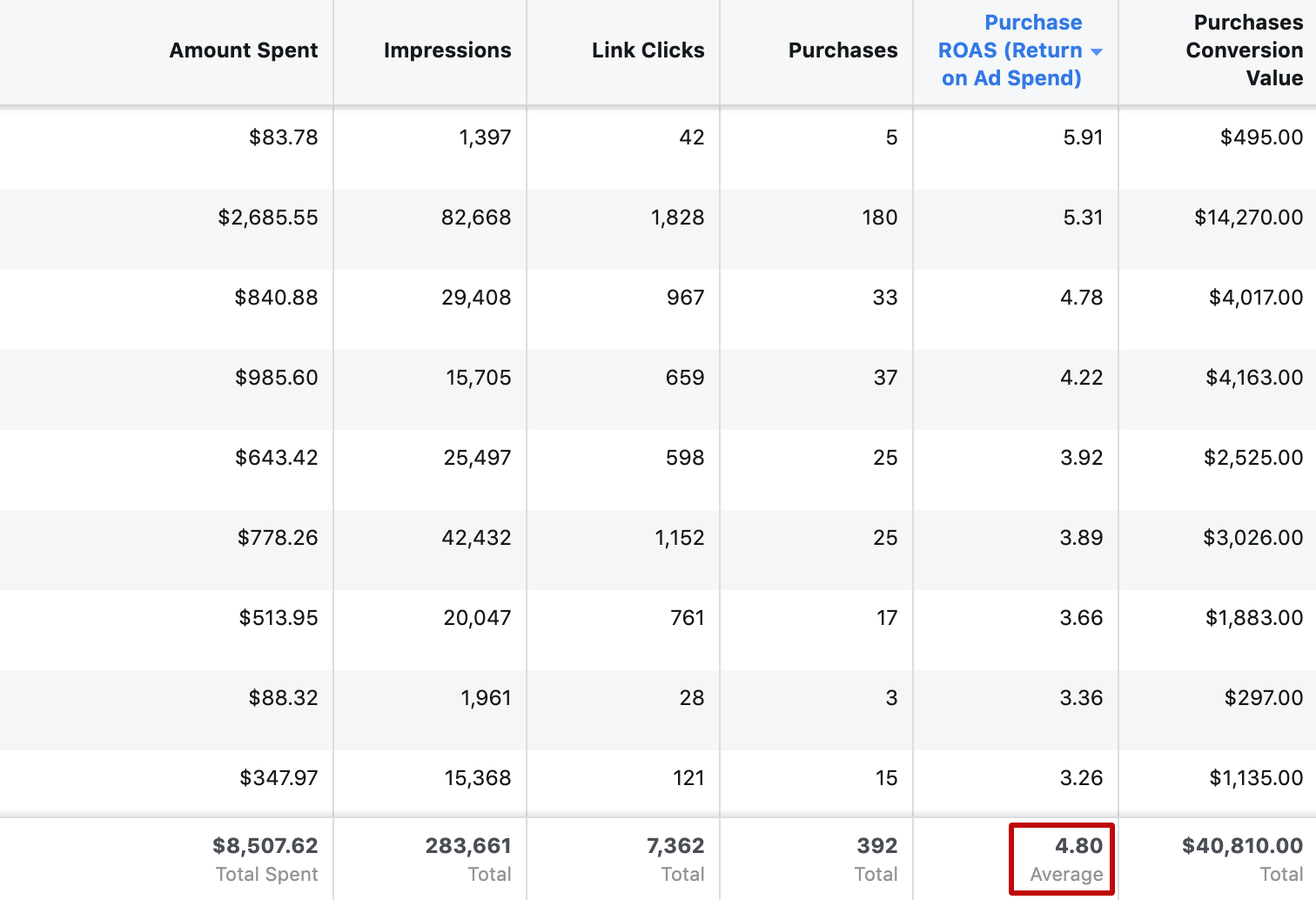 That's when I realized that the key to turning Facebook ads into profits, is targeting untapped audiences.

When you target interests with low competition (because hardly anyone knows they exist), you drastically slash your costs and improve your ROAS.

That means you can make more money from the exact same ad spend.

And use the extra profits to buy more ads!

So how do you unearth the 1000's of hidden interests that Facebook is trying to bury?

Everyone knows Facebook Ads Manager. Us marketing folks use it to create our ads and setup targeting.

But there's another entrance to Facebook's targeting options.

This one is much less known. 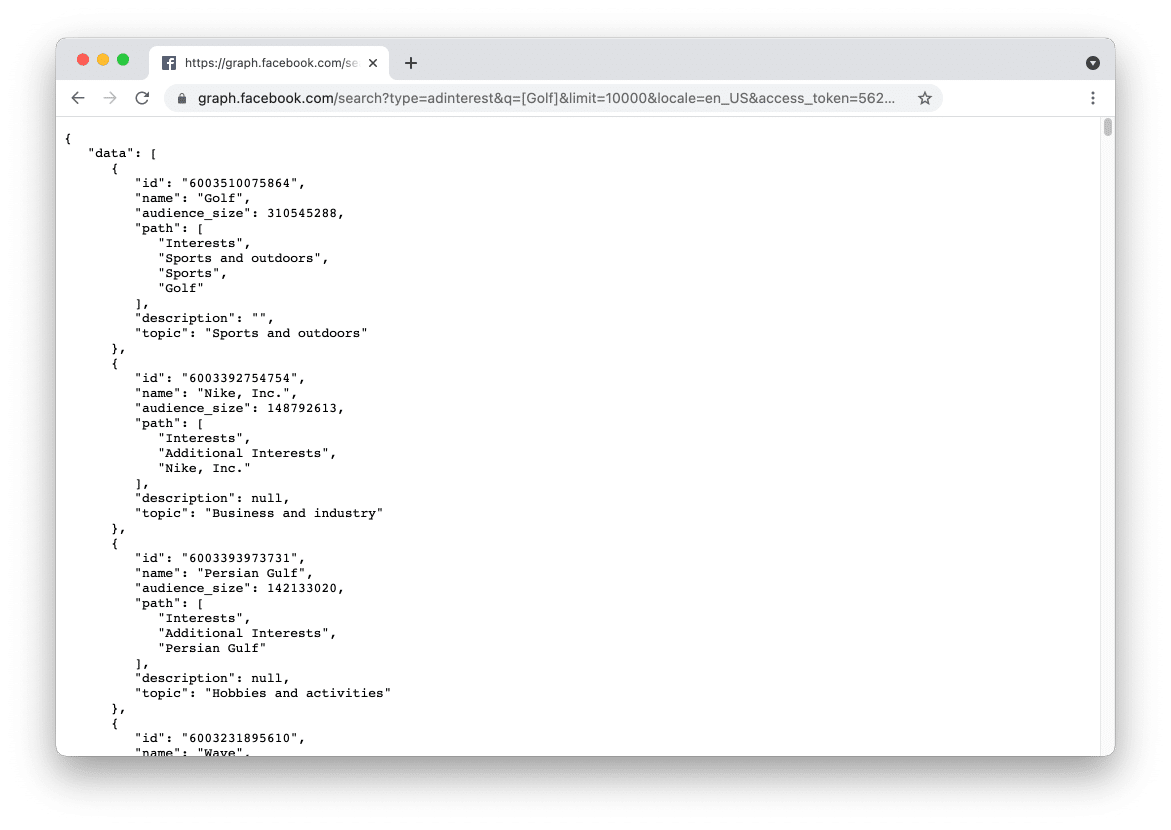 I discovered that through this API you can get access to many more interests than just the handful that are auto-populated inside Facebook Ads Manager.

And while they aren't suggested, you can enter them into Facebook Ads Manager when setting up your targeting.

The only way to access the thousands of interests that Facebook hides, is learning how to code or...

with a tool that can see under the surface!

Uncover 1000's of hidden interests you can use to run more profitable Facebook ad campaigns. 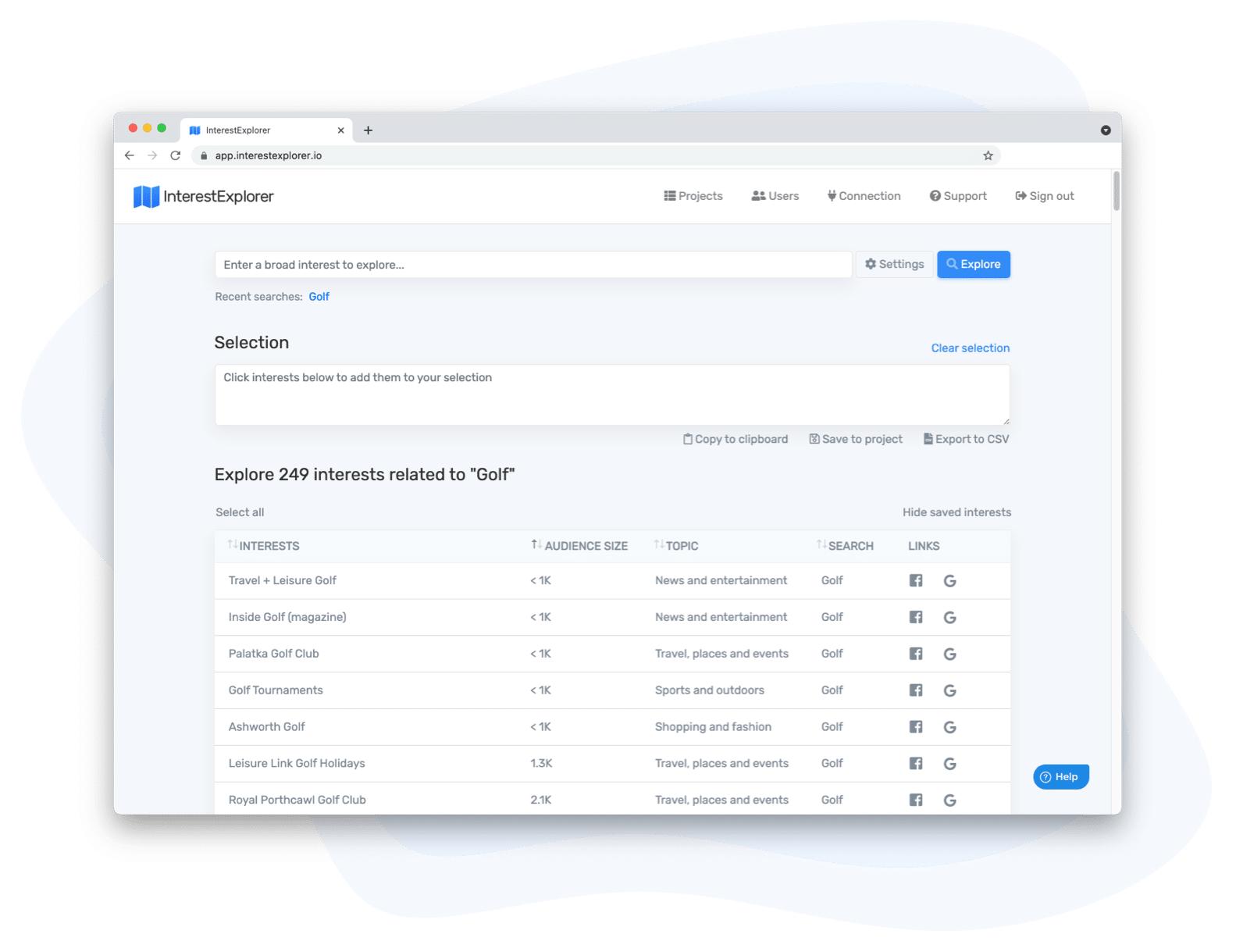 This easy-to-use software lets advertisers like you search 1000's of hidden interests via Facebook's API - in seconds!

Let me give you a quick comparison:

I've cloned a campaign for my meditation funnel and instantly lowered my cost-per-lead by 20% using search results provided by InterestExplorer.

Founder at Me Method

I can attest this is amazing. My first audience using hidden interests I went from $2.20 per lead to just $0.37 with over 283 leads generated in 3 days.

Whether you're dropshipping, selling print-on-demand or building your own brand, this software will lower your ad costs and increase your profit margins.

You need to be smart when you don't have the ad budget of the big brands you're up against. This software will get you hidden low-competition interests to target.

More precise targeting will result in lower CPM's and CPC's. Spending less on ads means you can scale your offer faster and earn more commissions than ever.

Impress your clients by getting them better results faster. This tool will give you diverse ideas on how to target any market and it will pay for itself multiple times over.

Find 1000's of hidden Facebook interests that let you out-advertise your biggest competitors.

Here's how it works:

Find hidden interests in any niche

Use the search bar to explore a broad topic. Within seconds you'll be browsing a list of all hidden interests. 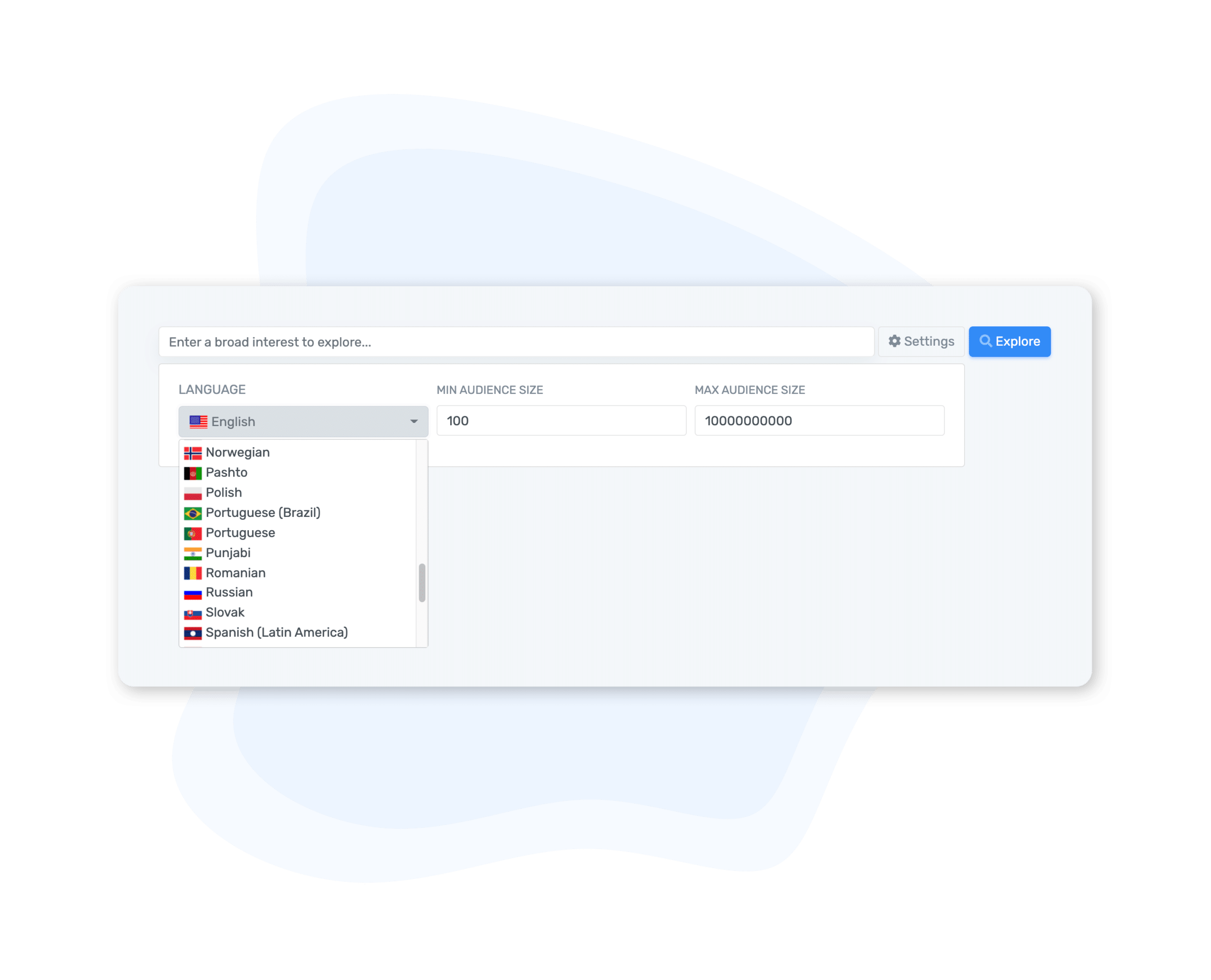 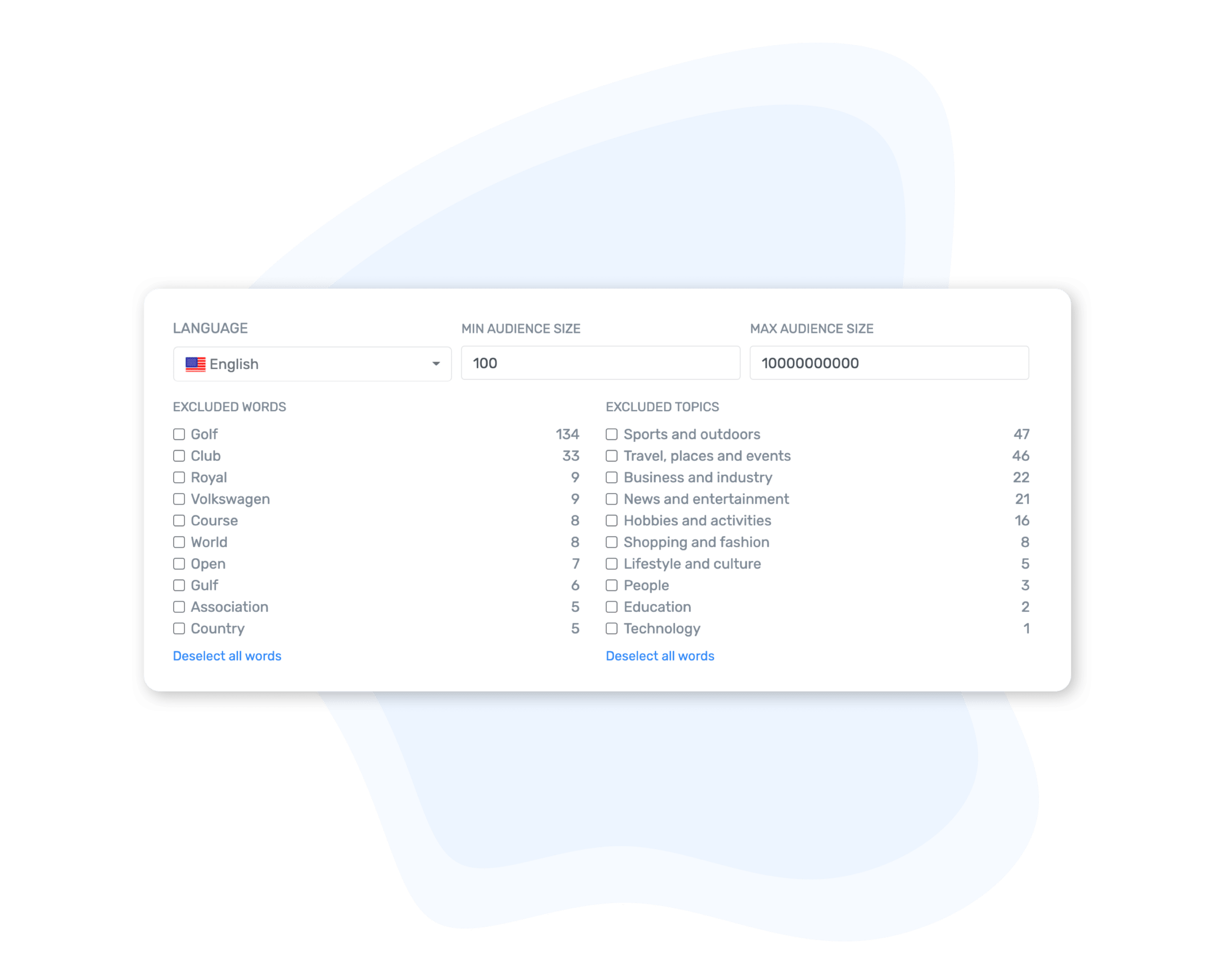 Use the filters to narrow down the results by audience size and increase relevancy by excluding certain topics.

Save time and stay super organized

Save your interest finds into projects that you can add to over time, so you'll avoid having to repeat any research. 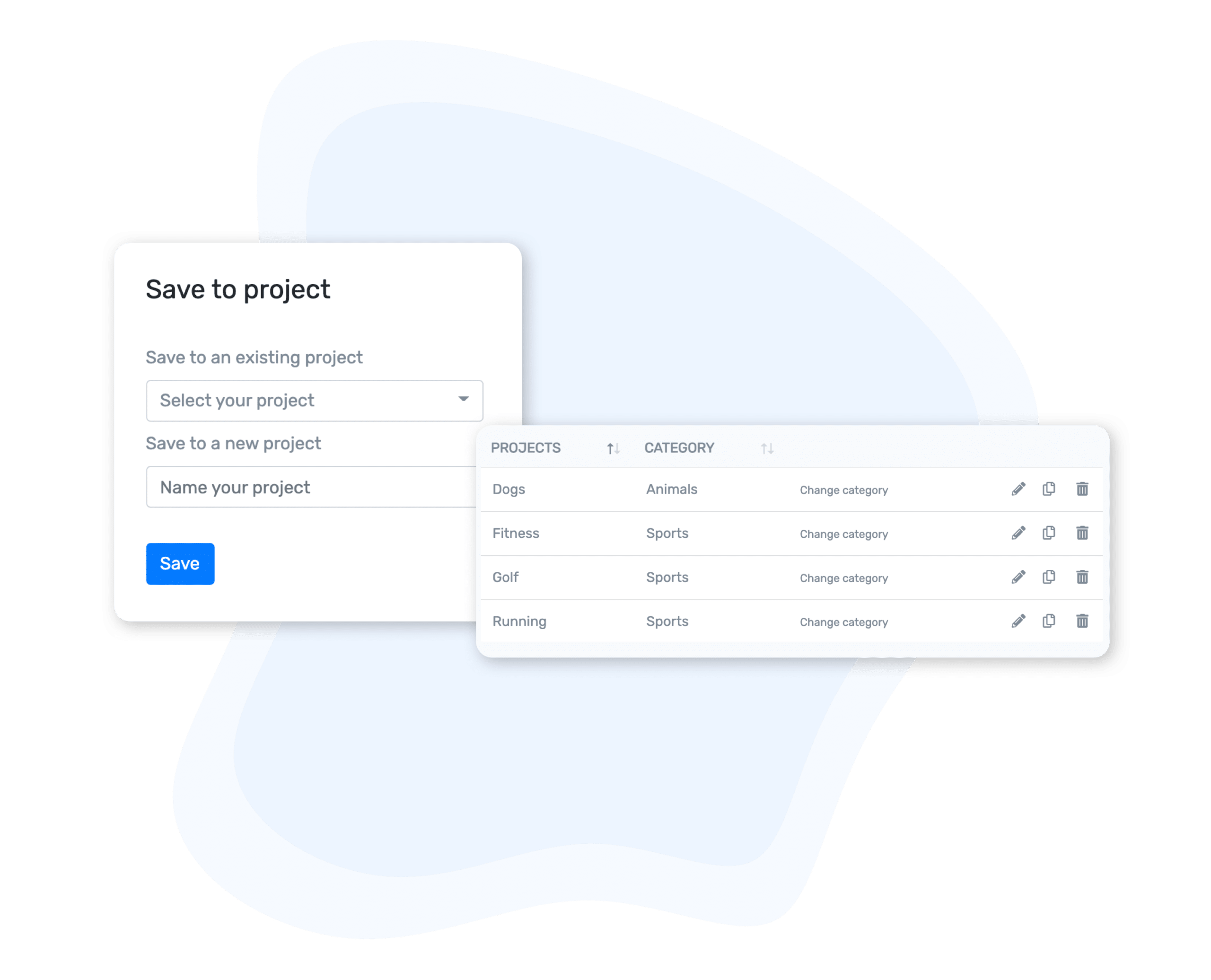 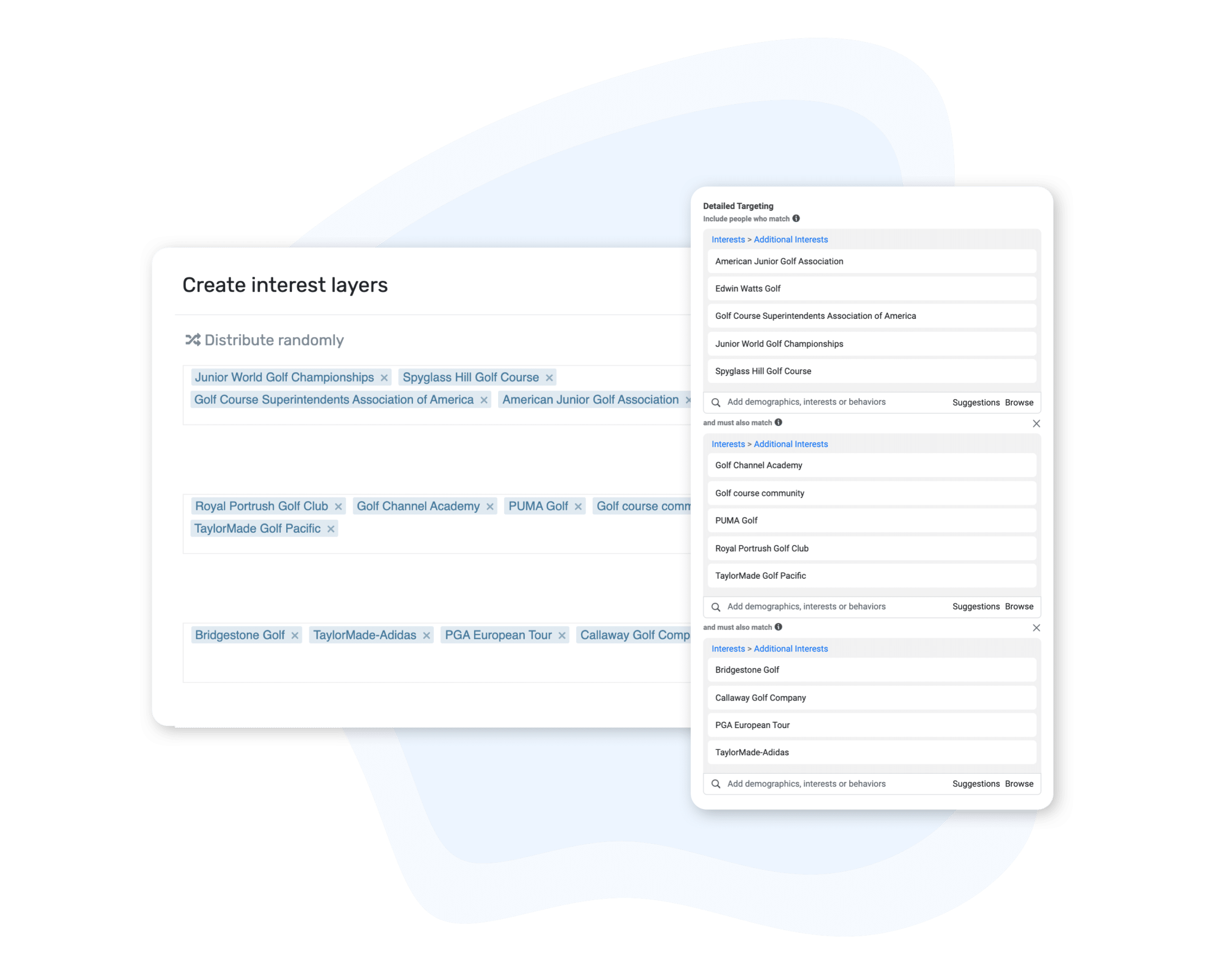 Create layers of interests so that you force Facebook to show your ads just to the hottest leads and buyers.

Copy your interests to the clipboard, export them to a CSV file or apply them straight into existing ad sets. 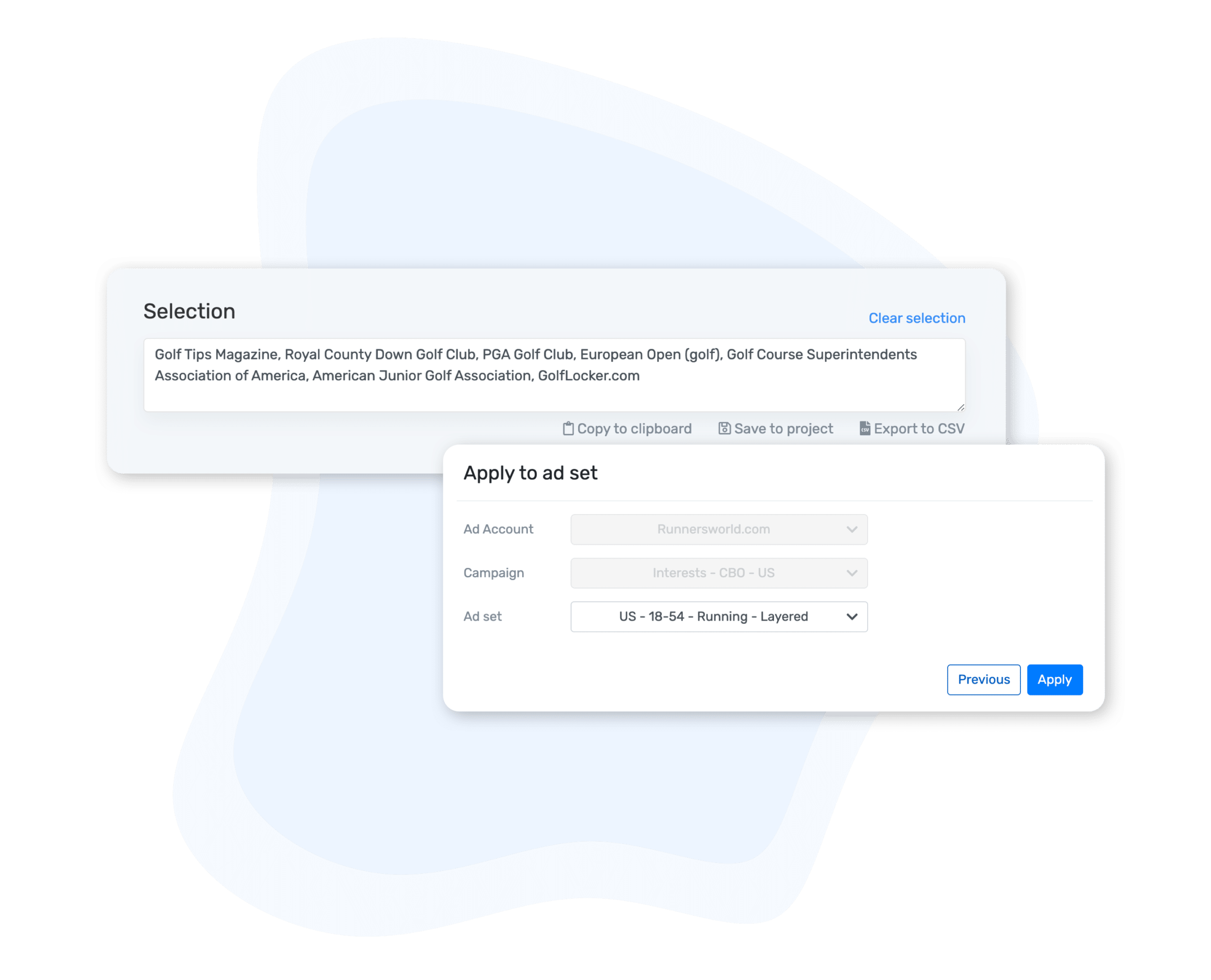 InterestExplorer is 100% safe to use.

Our software was approved to use Facebook's API, so it's 100% compliant with their policies.

Future-proof your targeting by relying less on the algorithm.

For years, marketers have increased their reliance on Facebook's algorithm by leveraging lookalike audiences.

Or even giving Facebook full control by using broad targeting.

But any algorithm is only as good as the data it is fed.

Recently privacy initiatives, such as ITP and the iOS updates, have had a major impact on Facebook's ability to collect cookie data on websites outside of their ownership.

And as a result, using targeting options that require this data now leads to higher costs that eat away your profits. 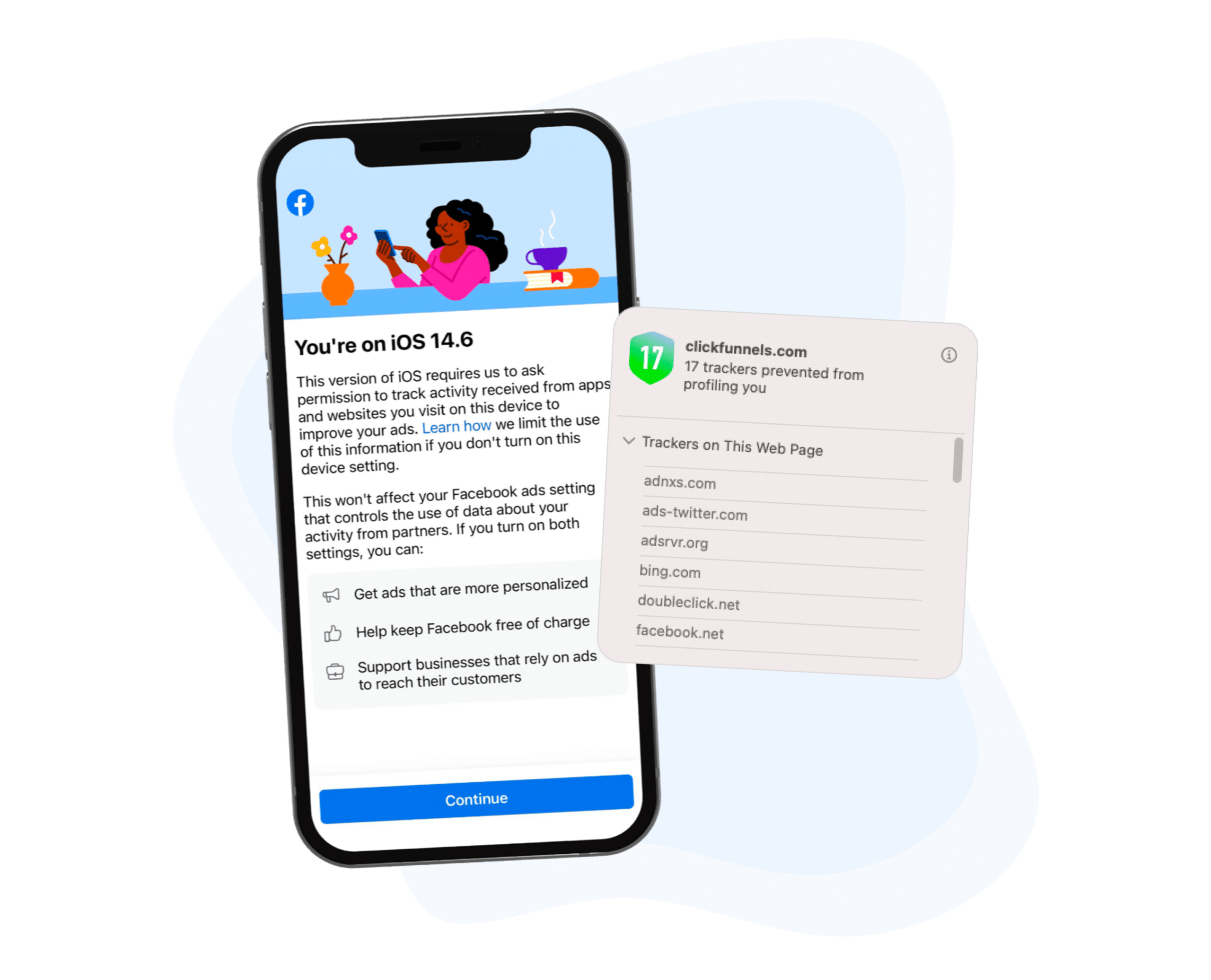 The good news is:

Interest targeting is unaffected by all of this.

Because Facebook largely infers interests from user behavior within their own platform, such as: profile information, page likes, groups and the content users engage with.

Interest-based targeting is what once attracted millions of advertisers to Facebook.

And where they're now fleeing back to, to get the lowest costs and highest returns.

My target audience is extremely niche and using Facebook's limited suggestions just wasn't cutting it. The amount of hidden interests I found through InterestExplorer were in the hundreds. I layered these and the results have been outstanding!

How to find the most profitable Facebook interests for any offer (even in niche markets).

Get access to our "Interest Targeting Intensive" masterclass, that teaches how to best target your ideal customer persona. 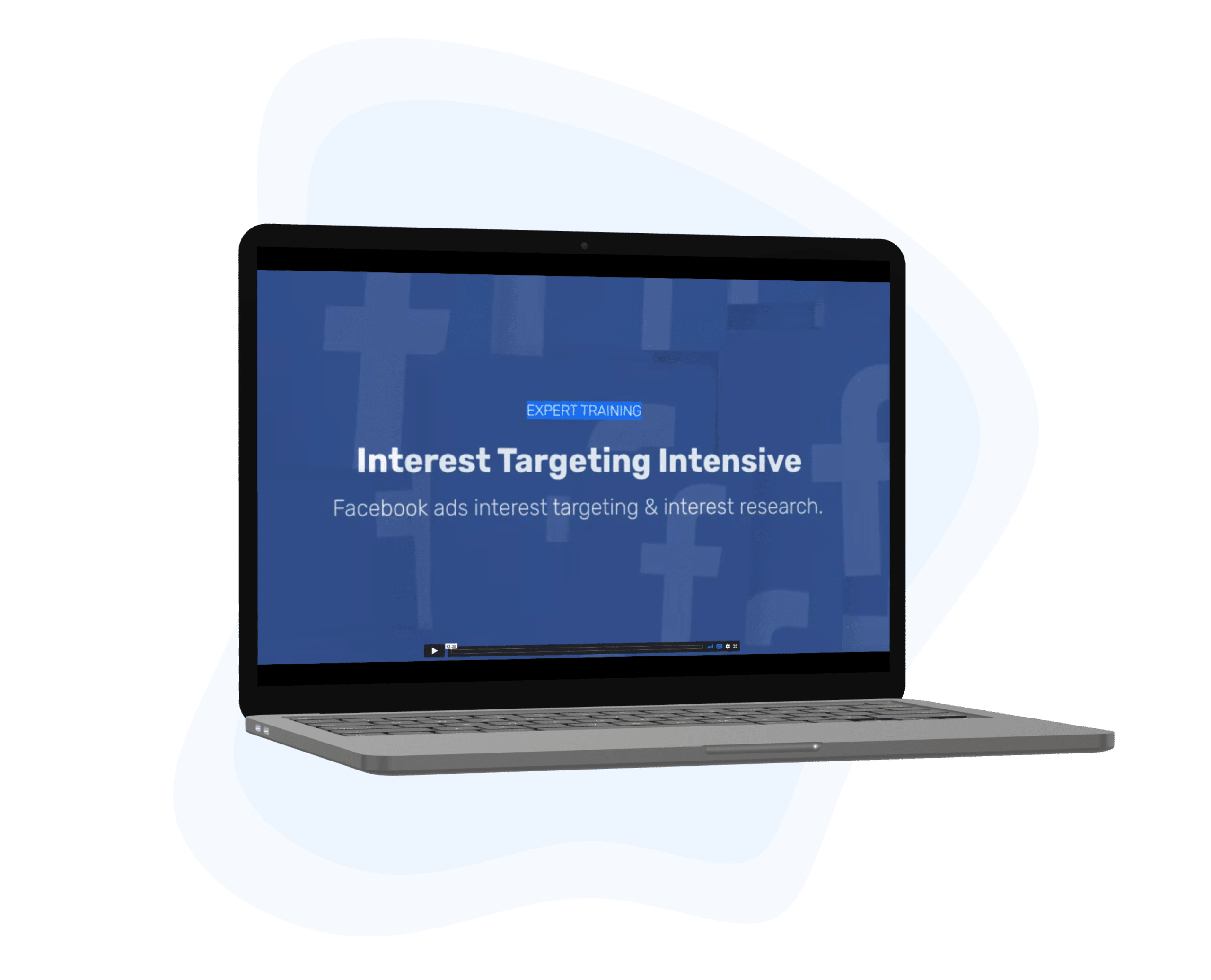 In this training you'll discover:

It doesn't matter if you are brand new to Facebook ads or a seasoned ads veteran, you wouldn't want to skip this.

By the end of the masterclass, you'll know exactly how-to use interest targeting to build money-making ad campaigns.

Awesome training! I'm impressed by how you manage to give an overview and a deep dive at the same time. Your thoughts on audience size, budgetting and layered targeting were eye-opening for me.

Highly recommended for anyone looking to learn more about how to properly research, set up and manage a Facebook campaign. It's basically a thousand dollar course, offered for free.

Your purchase is protected by a "no nonsense" guarantee.

If you decide to get InterestExplorer today you'll have 30 days to put it to use and improve the performance of your ads.

In the unlikely event it doesn't meet your expectations, we'll just refund your full purchase amount - no questions asked.

It's as simple and straight-forward as that.

And, even better, you can still keep access to the training.

So, InterestExplorer either proves its value to you by showing hidden (low competition) interests that boost your results...

Or it costs you nothing.

With a lifetime license, InterestExplorer pays for itself multiple times over.

Because hidden interests will get you cheaper clicks and higher profits.

ONE TIME PAYMENT (NO RECURRING FEES)

Show me these hidden interests

Prices exclude VAT which will be calculated at checkout.

Everything in standard, plus:

ONE TIME PAYMENT (NO RECURRING FEES)

Show me these hidden interests

Prices exclude VAT which will be calculated at checkout.

InterestExplorer is used by 12,408 smart marketers, just like you.

InterestExplorer has been that nice silver lining that helped me discover more audiences that I didn't know existed deep in the underbelly of Facebook's interest but don't auto-populate when searching.

Founder at The Digital Gal

You're going to find hidden interests, target those and see less competition. A lot of my POD students are brand new to Facebook ads and InterestExplorer helps them to quickly get up and running.

Yes, you get all future software updates and new features free for life.

... and answers to other questions:

Does my purchase include future software updates?

Yes, whenever Facebook makes changes or updates to their data we'll update our software. We also add new features or make improvements to existing features based on user feedback. Updates are always included and free.

Which languages does InterestExplorer support?

InterestExplorer supports all 43 languages that Facebook supports in their API. The default language is English, because most interests are available in English. Select any of the other Asian, European of African languages to find hidden local interests.

Most tools don't have access to the same Facebook API, because developers need to get explicit approval from Facebook to use it. Also some other tools store interest data, which means interests might not be available anymore for targeting. InterestExplorer presents more interests for the same searches and always checks if interests are available right now. It's without a doubt the best solution out there, we've tried them all.

What if I don't get results from InterestExplorer, is there a guarantee?

Absolutely. We offer a 30 day "no questions asked" money back guarantee.

To use our search tool that uncovers hidden interests, you don't have to connect your Facebook account.

Can using InterestExplorer get me in trouble with Facebook?

No, absolutely not. We've built InterestExplorer in accordance with Facebook's terms of service and use just their official API's. Facebook developers that want to publish apps using this functionality, need to pass Facebook's strict app approval process which includes a manual review by one of Facebook's employees. InterestExplorer passed this process and is fully approved by Facebook.

Does InterestExplorer work on both Mac and PC?

InterestExplorer is a cloud-based software that you can access from any device. There are no device-specific requirements to use this software.

Within the next 24 hours you could already start seeing lower cost per clicks on your ads.

Would you like to target hidden low competition interests, so you can lower your ad costs and improve your ROAS?

While at the same time cutting back the time spent on audience research?

And do you want to see results fast?

If you decide to test drive InterestExplorer, you'll have instant access to thousands of hidden Facebook interests.

Within the next 60 minutes you could be cloning one of your existing campaigns with hidden interests, so you can start seeing lower cost per clicks within a day from now.

All results stated on our website are not typical, and do not imply you’ll duplicate them (or do anything for that matter). Any of our results or the results of our users are only estimates of what is possible. Results of our users are based on many factors including luck and effort. We have no way of knowing how well you will do, as we do not know you, your background, your business model, work ethic etc.