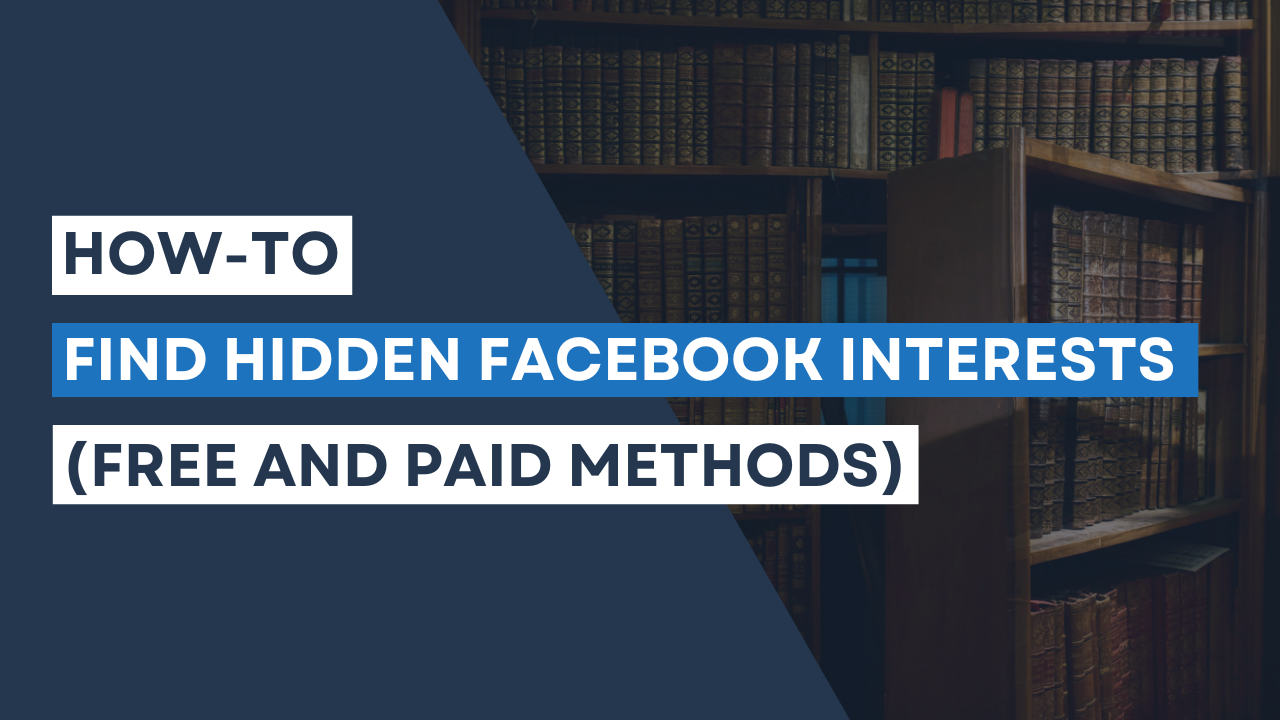 If you’ve been advertising on Facebook for some time (like me), then you know that nothing is as fitful as Facebook. The UI of Facebook Ads Manager is constantly changing, as are the available features.

In order to simplify the interface and make it accessible to a wider group of advertisers, many features and options have been removed over time. Including many of the interests available for targeting.

But these interests have not been removed. They are still available for targeting, only now hidden…

In this article I’ll explain what hidden Facebook interests are and I’ll show you multiple methods for finding them (both free and paid).

Hidden Facebook interests are interests that you can target with ads, but that aren’t auto-suggested / auto-populated in Facebook Ads Manager.

Let me show you what I mean.

When you type a keyword into the Detailed Targeting form field when defining the target audience of your ad set, Facebook will open a dropdown with suggestions for interests you could use.

These interests are related to your input keyword.

Regardless of your input keyword, Facebook will show a maximum of 25 related interests you can target. These are called “interest suggestions”.

Most advertisers will just use these interests to define their target audience. But most of the interests that are included in these 25 suggestions, will be fairly broad keywords with large audience sizes (like in this example: golf course, golf club, golf ball). So… not really targeted.

There are 2 reasons for that actually:

It makes the decision process simple and that helps unexperienced advertisers to launch their first campaign quickly. Having too many choices is often negatively correlated with making a choice.

It increases the targeted audience of campaigns. By suggesting broad interest audiences, the reach of the campaign will be bigger and therefore it will generate more revenue (for Facebook).

But it doesn’t necessarily generate more revenue for advertisers…

Next to the 25 interest suggestions Facebook presents in the dropdown, there are many more interests that used to be suggested as well.

But in their effort to simplify the Facebook Ads Manager interface they’re now hidden.

I’ll show you multiple methods, both free and paid, to reveal these hidden Facebook interests that are still available for ad targeting.

Let’s start with the free strategies you can use to find hidden Facebook interests. These are manual strategies that don’t require software.

The first free method for finding Facebook hidden interests is to “guess” them by running through the entire alphabet. You’ll just type your main keyword followed by all the letters of the alphabet:

This forces Facebook to suggest 25 interests, which will often include new interests that weren’t suggested before when you typed just “Golf”.

The second free method for to reveal hidden Facebook interests is to use the API that’s available to Facebook app developers. This sound super technical, but it’s actually really easy to do.

All of the features that are available inside Facebook Ads Manager, are also available through Facebook’s “API”. This is the interface programmers interact with when they’re building 3rd-party tools that include Facebook functionality. The “interest” API is publicly accessible to anyone.

It’s really easy to use. You just enter a keyword (like Golf) into an API URL in your browser and hit enter. Then it returns output like above.

This output contains all interests related to your input keyword.

Facebook’s interest suggestion dropdown inside Facebook Ads Manager uses this exact same API as their source of data. They just limit the number of displayed results to 25, while there are many more results.

Want to learn how to use this API yourself to find hidden Facebook interests? Download my free PDF that explains it in detail.

Both the alphabet method as well as the Facebook interest API method are entirely free. The only downside it that they require some manual work (searching, de-duplicating and organising results).

There are quite a few vendors of tools that automate the manual methods described in the previous section. I built InterestExplorer initially to make my own research process less time-consuming and it’s now used by 7000+ Facebook advertisers. From small businesses to agencies and big brands.

InterestExplorer isn’t the only tool out there. But I most definitely offers the best value for money, because:

It finds more interests for any given input keyword, compared to alternative solutions. This is because we built our software to not just search the API for an input keyword, but also take the resulting keywords and run these through the same API again to collect even more hidden Facebook interests.

It has some handy features for organising your interests into projects and hiding interests that you already added to a project. This speeds-up your research process, because you don’t have to de-duplicate your results and are just looking at fresh interests all the time.

Why You Should Use Facebook Hidden Interests In Your Targeting

Maybe I should’ve started this article by explaining why you should use hidden Facebook interests, instead of just the ones that are auto-populated by default.

Well… I kind of touched upon this in the beginning. The interests that are suggested inside Facebook Ads Manager, are often very broad interests keywords. With really big audiences.

More often than not these interests aren’t really defining for your target audience. They’re not laser-targeted, but include a lot of people that aren’t really interested in the topic at all… (I’ve devoted an entire article on how Facebook determines interests).

For example: the interest “Golf club” is a lot less defining for an audience of enthusiastic golf players compared to an interest like “Bubba Watson” (that’s a famous Golf player).

The latter is a much better (hidden) interest to target, because:

If you’re an enthusiastic golf player, you’ll absolutely know who Bubba Watson is. But if you’re not into golf, you have probably never heard of Bubba. So an interests like “Bubba Watson” clearly defines a target audience, while exluding everyone who’s not in that audience.

If you liked this article and want to further level-up your targeting skills, I recommend to also read my 11,000 word Definitive Guide on Facebook Interest Targeting.